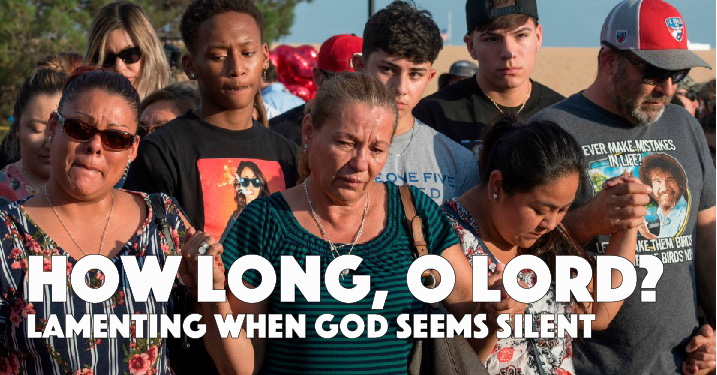 “Nothing to be done.” That’s what some might say when faced with evil, darkness, or the seeming silence of God. This week in the news a common response to the darkness experienced in our national culture, specifically in the wake of gun violence, has been the opposite: “Do Something!” In life, and in faith, we alternate between those two extremes: defeatist passivity and/or unrelenting activism. We don’t always (easily) find meaning in and of our world. Our desire for meaning is also a desire to understand our suffering and a desire for justice. We want to understand what’s happening and why it happened to us. That striving for meaning is the basis of the play “Waiting for Godot” which begins with the phrase “Nothing to be done.” That striving is the force that ties our stomachs into knots in our partisan, polarized, and turbulent time when all seems out of control.

Psalm 13 is a prayer of lament in the face of God’s silence. The poet prays for a response, for help, for a clear direction…for anything! Yet in the prayer we never hear the response. After many cries for help there is a silence. We easily jump over it, not noticing the utter-defeat of verse 4 “my foes will rejoice because I am shaken.” And the transformational “But” that begins verse 5. How much time happens between the two moments? What happened to move the poet from despair to trust?

That same silence is in the text that tells the troubling story of God asking Abraham to sacrifice his long-awaited only son, Isaac in Genesis 22. Verse 10 ends with, “Then Abraham reached out his hand and took the knife to kill his son.” And then transitions abruptly to “But the angel of the Lord called to Abraham from heaven,” Abraham has found meaning in life by following God, yet now God wants him to literally sacrifice everything he’s striven for to make meaning of life. Between the verse 10 and 11 this despair and confusion becomes a justice and clarity.

This prayer of lament, of seeking illumination in the darkness, or thirsting for justice in the injustice, wondering why God is silent, seems to become some sort of cathartic faith experience. It’s not unrealistic or naïve, but neither is it defeatist or cynical. These texts seem to tell us that our experience of God is shaped by language (the pause between the period and the but) and that vice-versa our language for God is shaped by our experience.