Un-Redefining the concept of Parish 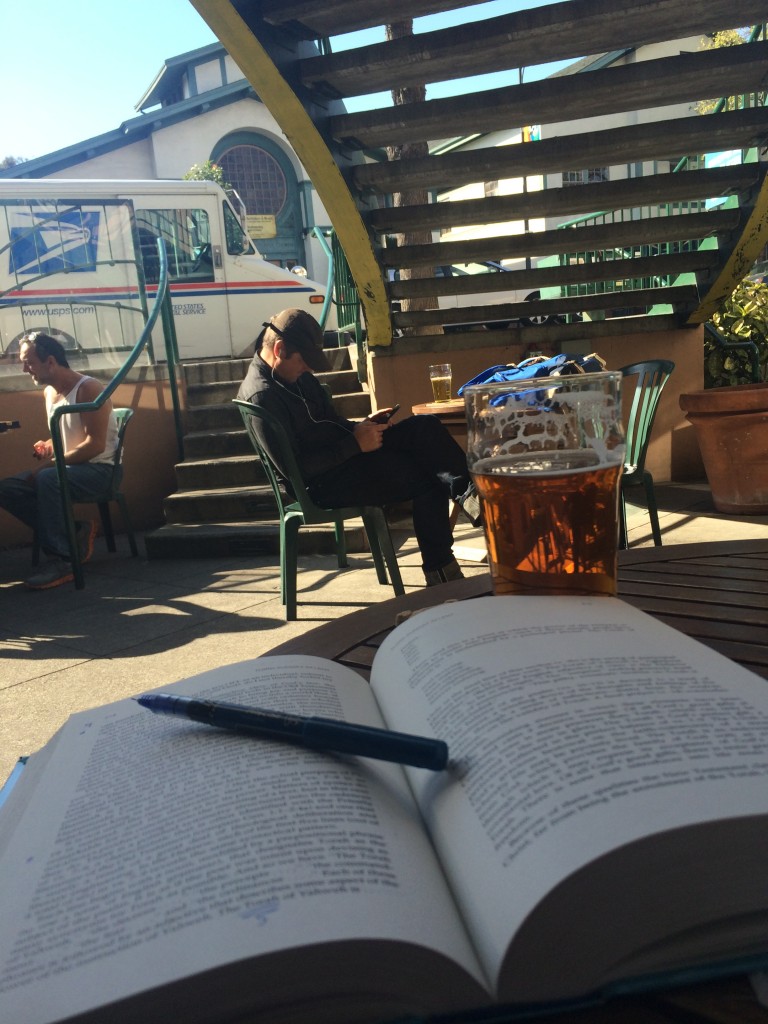 Seeking a warm space to read, reflect and write yesterday, I crossed the street to the pub located across the street from the church I pastor.  The sun was out and I was looking forward to feeling it on my skin and not work alone. Plus they have a great beer list.  I brought my dog, whom the staff knows by name, and chatted with the waitress at my station, who commonly converses with me about her favorite recent postings on our church marquee.  While there another puppy was at a nearby table.  His owner came over to see my dog, and I then realized that the table was filled with other waitresses from the pub who were off, but there to hang out.  As they told me “where else would we go?  Here there’s good food.  good beer.  great people.  and the sun!”  The owner stopped to say hi, and to leave some treats for my dog.

I was reading for this week’s sermon [LINK to my thoughts], scripture talking about freedom, obedience and being a people of and for God.  A local merchant passed and said hello.  As I finished up both my note-taking and my beer drinking (local brew of course) and prepared to scurry to my next appointment, as parishioner whom I haven’t seen in a while arrived and began to talk, quickly checking in and catching up. Gathering my stuff, quickly arriving at the nearby elementary school top pick up my children – late – of course – I had a realization, or two.

1.  I am in fact often late. Either I seek out chaos and connections, or there is something that actually happens in ministry where the thing to be heard/connection to be made/ happens at the last minute – no matter how you plan for it.

2.  We need to un-redefine what parishioner means.  The word goes back to the church of medieval and after Europe, considered as a parish:  a small administrative district typically having its own church and a priest or pastor.  Everyone was “christian” and so geography was broken up to better organize and service the people.  And yet through the emergence of modernity, the questioning of the ecclesiastical institution and a recent theological emphasis on confessional faith the word has changed.  The dictionary offering the following synonyms: parishioners, churchgoers, congregation, fold, flock, community.  Somehow the word went from meaning people in an area, to christian people who participate in a particular community or under particular leadership.

Thinking back in the car on the drive home, I realized that I hadn’t ran into one parishoner at the pub, but at least a dozen.  I am pastor (or whatever you want to call it) for not just my friend who I briefly saw, but also for those others who regularly chat with me at the pub, cross my path in our neighborhood, or meet me.  Now this isn’t really a new thought for me. It’s how I’ve long viewed my work, vocational and relationships.  And yet….if I affirm that notion of parishoner, why do I so often do my work “inside” the building, alone at my desk (other than for quiet)?  Why organize activities, services, collaboration without asking what those outside the four walls of our “building” are looking for, wanting to do, hungry to taste?

The patio of the pub is loomed over, in an organically urban way, by the architecture of the church across the street, a marvelous crafted artistic door – which oftentimes  seems more than not to be closed.  If most existential or encounter-moments happen in an unexpected, last minute, unplanneable way….then if my business is to be attentive to, and present in such moments….I should probably go be at that patio, or in the café kitty-corner, or the dog-park several blocks away more often.