Career Day :: Who Wants to be a Pastor?

I helped today at a Career Day at my child’s elementary school.  Parents and caregivers were invited to present and represent their diverse careers, jobs and vocations.  I helped last year and had a handful of kids engage me in conversation at my booth.  Maybe it was the pastoral robe that made me look like batman?  Maybe it was my vocation?  Maybe it was my breath…that scared them off.  So this year I wore neither a robe, nor a clerical collar, but my standard jeans and nice shirt.  My thought was that I wouldn’t scare kids off so much in that choice of uniform.  In addition it’s what I actually wear on most days.

I wondered if I would have many visitors to my booth.  Last year I noticed that the corporate booths with gifts and the bakery gifts with free snacks as the bedazzled fashion table with samples, all did remarkably better than I did with my powerpoint slide show, Hebrew Bible and multiple stoles.  How could I make it more engaging? eye-catchy? sexy? interesting?  I mean who wouldn’t want to get a punch-outable fold-up AC Transit bus from an actual AC Transit Bus Driver?  I was too old to get one!  Who wouldn’t want to lift weights and jump rope with a physical trainer?  Or who could pass up playing with a stethoscope and getting your blood pressure taken by a live RN – with free stickers to throw in?! 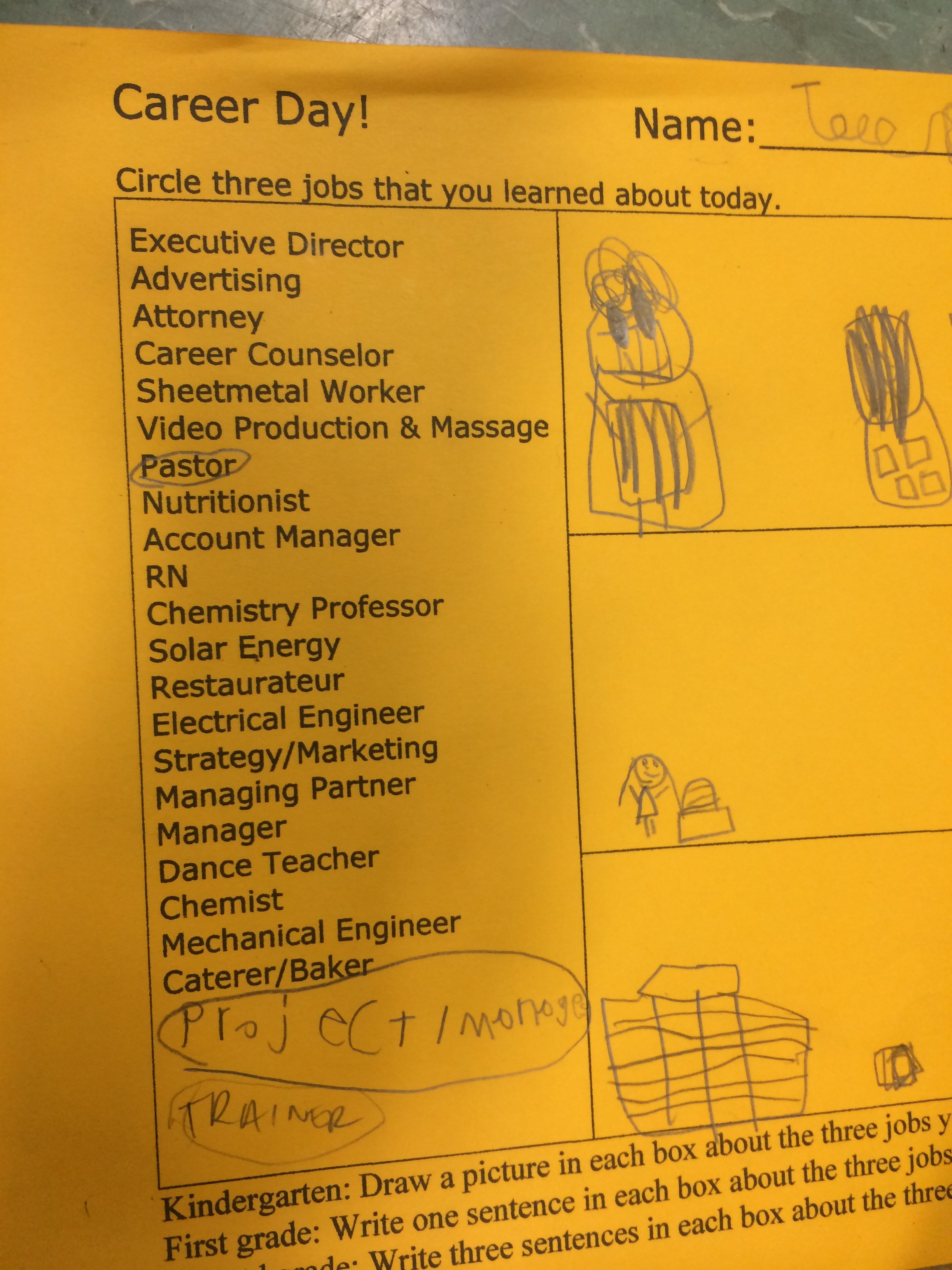 I was feeling the pressure to represent my pastor-people well.  Plus I often volunteer at the school and have either parents ask me what I used to do for work before becoming a stay-at-home dad; or the kids ask me if I’m a substitute teacher or photographer. Maybe it was my pride that was getting the better of me.  In any case, I decided to create a game to engage kids with questions and maniable flaps – all the better to be kinesthetic learning by engagement and encounter.  I decided to ask questions to get kids thinking…do you like reading and writing?  Pastoring could be for you!  Do you love math and science?  If so, engineering might tempt you more.  Do you want to make tons and tons of money?  Do you want to make the world a better place?  Do you like to talk to people?  Do you want to do something different every day?  Who couldn’t be tempted by such fun. 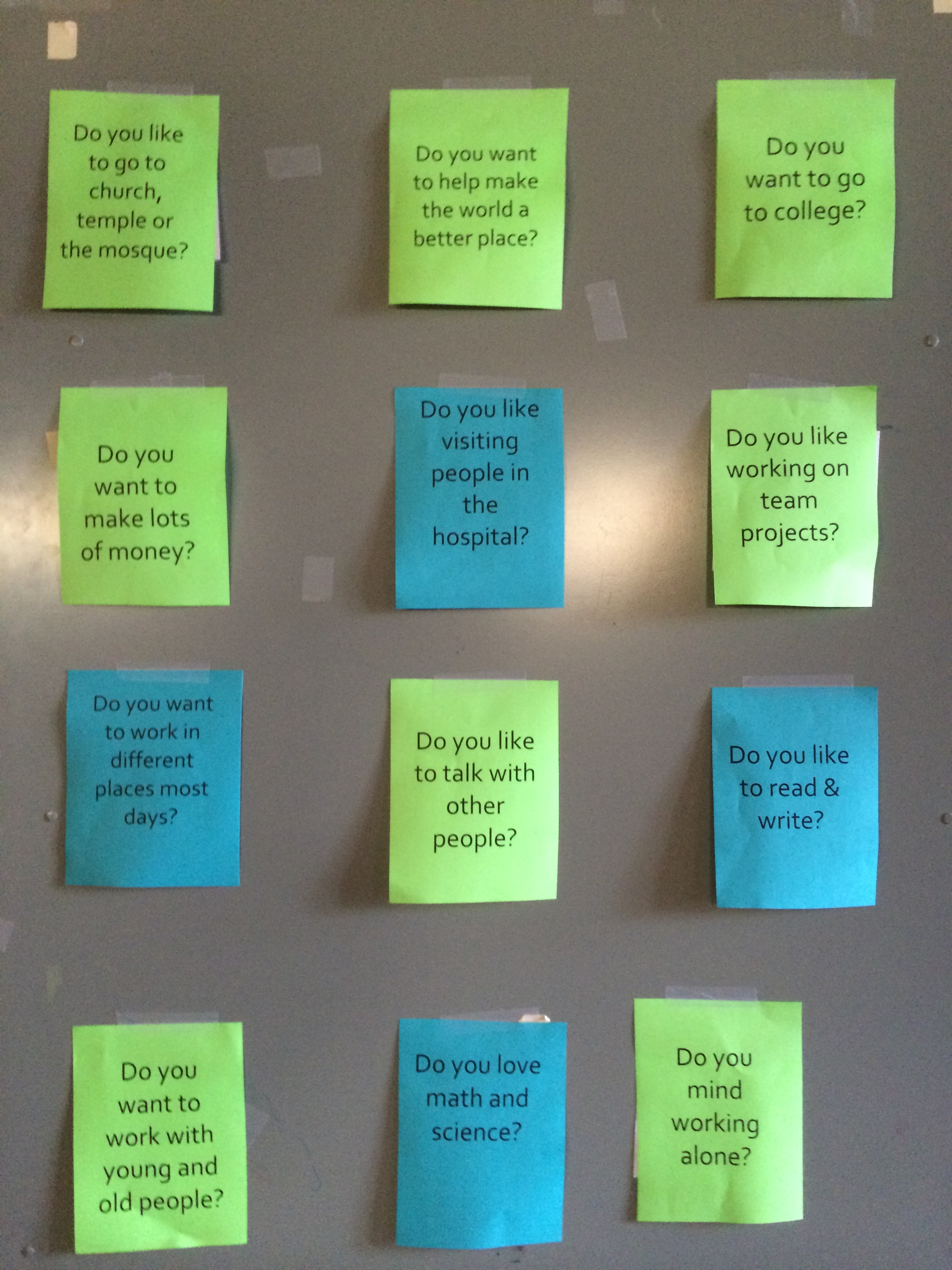 What I found is that I still didn’t attract that many kids.  I was the table to which those who wandered around like deer in headlights were directed.  Of course some of the kids I knew – friends of my child – came to say “hello.”  Surprisingly what I found was that many kids claimed not to want to make tons of money, but preferred to have a job that makes the world a better place.  One kid did say he didn’t want to be poor, to which I responded that pastors at least have food, housing and clothing.  I know.  I know.  We’re talking 6-11 years old.  It’s not scientific.  But encouraging nonetheless.  And unsurprisingly, at least for me, was that more than 90% of the kids with whom I spoke didn’t know what a pastor was, and/or had never been to church (or temple or a mosque).  It was more testimony to the fact that people are increasingly un-churched, or un-exposed to religiously organized communities.  The majority of kids only understood when I explained my job as being both the principal and teacher (and custodian) of a church, which is like a school for people who want to talk about God and do good in our city.  As I watched the crowd of students visiting the chemist, career counselor and baker situated across from me, I found myself wondering if I am indeed working in a dying profession.

My kids always tell me that my job is talking to people, drinking coffee, talking with more people, and getting more coffee.  Funny thing was that the corporate executive who sat next to me, hearing me talk, which I heard her talk all morning….said in the end, “maybe I should have been a pastor….sounds better than corporate life to me.”  So I ended the experience with a trip to a café for a latte, before heading to the church campus.