One of the famous stories about Francis is his encounter with a wolf in the village of Gubbio. [LINK to the Story from the Little Flowers of Francis]  Located just miles from Assisi, it was often visited by Francis, yet this event overshadows the others.  Supposedly the villagers and their animals were threatened, attacked and killed by a wolf.  Francis came confronting the wolf, who bowed to him as he held the sign of the cross.  The wolf “converted” or was overcome and redirected by Francis, and spent the remainder of his days supposedly helping the villagers who in turn promised to feed the wolf daily from their table scraps.  Whether the story is objectively true, a legendary metaphor, or hagiographic story-telling, the foundational theme is that Francis didn’t just take on evil, destroy it, or avoid it, rather he confronted it and overcame it, subverting it to the good of the gospel of Jesus Christ. 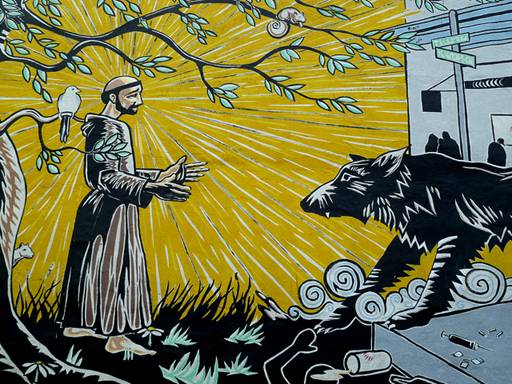 Our scriptures for the day also address how Jesus calls us not to condone, avoid, or merely resist evil; but rather to radically overcome it through self-sacrifice, communal commitment and creative non-violence.   The Apostle succinctly sums it up in Romans 12:21: “Do not be overcome by evil, but overcome evil with good.” Evil is defined as “profound immorality, wickedness, and depravity, esp. when regarded as a supernatural force.”  Some say that it’s when something bad becomes systemic in our culture or social systems.

Evil can be hard to understand.  During my sermon someone texted me the question “What really is the evil we need to overcome?” It is someone else?   Is it a force in society, or culture?  Is it a person?  In my reflection on all of this I turned to the words of Simone Weil (an extraordinary Christian French woman, philosopher and activist, who died during WW II and reflected much on Christianity), from her book Gravity and Grace in which she has a whole chapter on evil.

We experience good only by doing it.  We experience evil only by refusing to allow ourselves to do it, or, if we do it, by repenting of it.  When we do evil we do not know it, because evil flies from the light.

Does evil, as we conceive it to be when we do not do it, exist?  Does not the evil that we do seem to be something simple and natural which compels us?  Is not evil analogous to illusion?  When we are the victims of an illusion we do not feel it to be an illusion but a reality.  It is the same perhaps with evil.  Evil when we are in its power is not felt as evil but as a necessity, or even a duty.

As soon as we do evil, the evil appears as a sort of duty.  Most people have a sense of duty about doing certain things that are bad and others that are good.  The same man feels it to be a duty to sell for the highest price he can and not to steal etc.  Good for such people is on the level of evil, it is a good without light.

The sin which we have in us emerges from us and spreads outside ourselves setting up a contain of sin.  Thus, when we are in a temper, those around us grow angry  Or again, from superior to inferior: anger produces fear.  But at the contact of a perfectly pure being there is a transmutation and the sin becomes suffering.  Such is the function of the just servant of Isaiah, of the Lamb of God.  Such is redemptive suffering.  All the criminal violence of the Roman Empire ran up against Christ and in him it became pure suffering.  Evil beings, on the other hand, transform simple suffering (sickness for example) into sin.  It follows, perhaps, that redemptive suffering has to have a social origin.  It has ton e injustice, violence on the part of human beings.

I hear Simone Weil tying us to evil – that we ourselves are not evil, but can do, advance the cause of evil and become it.  The challenge of evil, in what she says, and in what I observe in my own being and sights is that we are often deluded by illusion, and convoluted by fear, urgency and need – to justify the evil we advance (call it injustice, greed, racism, homophobia, environmental pillaging, theft) as a perceived duty or necessity.  An example is that I often feel no desire to help others financially, or even feel anger when I’m asked by panhandlers for money.  I feel that I need the money, to care for, feed and protect my family.  Deep underneath, somewhere in me, I really feel like there isn’t enough to go around for both them and my and mine.  And so I justify my avarice and lack of compassion as a duty to and for my family, rather than recognizing it as sin or evil I further in my personal actions.

The story of Francis at Gubbio confronts all of those levels of evil.  The wolf is seen as an evil force, as a perceived terrorist threat to the existence of the village (to use our modern language), which justifies any action.  Francis subverts that tendency towards self-protection through the murdering of others, as well as confronts the evil actions that the wolf does (also out of a perceived notion of necessity).  In the end maybe all Francis did was realize the need of both parties – the villagers for safety and the wolf for sustenance.  By feeding the world pro-actively, the people could transform the wolf’s necessity of pillaging and murdering to eat, into something else.

Jesus gives a radical teaching on evil in the Sermon on the Mount.  He links the actions of those who hear him (and us by extension) to the transformative, healing work of God in the world: salt, light.  Jesus gives concrete ways to confront, and overcome evil in his teaching.  How do they confront evil?  How do they overcome it?  How do they transform it?  Are they really possible?  Look at the parable of the Good Samaritan (Luke 10:25-37):  what evil is present?  How is it confronted?  How is it overcome?

An example of transformative Christ-like love overcoming and subverting evil.  Before and during WW II, André Trocmé was the pastor of the Reformed Church of France (the French Presbyterians) in the small village of Le Chambon sur Lignon.  With the help of his wife Magda, he gathered his congregants for weekly study of the Bible, in particular the teachings of Jesus such as the Beatitudes and other parts of the Sermon on the Mount (Matthew 5-7).  During WW II this small village saved possibly up to and more than 5,000 Jewish children feeling certain death in Germany and occupied France.  They hid them in their homes, claimed them as students in their school, feeding and caring for them, risking their lives for these unknown children – all in the name of Jesus of Nazareth and a commitment to obey his teachings to love our neighbor.  Ironically the village was located near the border of free an occupied France, around which there were many German troops as well as resistance fighters.  Odds are as least some of the German soldiers knew what was going on, and didn’t try to hard to stop it.  We know from records that the resistance fighters knew this, and so never attacked the village or the German soldiers policing it.  As so from an obedience to the teaching of Jesus to overcome evil with good many lives were transformed, saved and redeemed.  Here’s a video (in French with subtitles about the work of the villagers).

Now that example is great – they were people just like you and me – and still it’s easy to write it off as too extraordinary.  What’s amazing is that if you go to Le Chambon today, there is really nothing to see.  The church community gathered, rallied and stood up for the faith in that time and overcame evil with good.  Today it’s merely a nondescript, normal village.

*What word, phrase or image strikes you in the passages?

*How do you struggle with the evil in our world?

*What do you think is an evil in our world, nation, city?

*How have you – or haven’t you – overcome evil with God’s good?  How might you be hearing the Spirit of God call us to do so here in Berkeley, Oakland and Piedmont?