Today the Parks Department of the City of Oakland had a massive playground REbuild at Burkhalter Park in East Oakland.  Nested above Eastmont Mall and below 580 it’s a neighborhood that is not inundated with blight, nor on the radar for gentrifying newcomers.  It’s been my home for the past 10+ years.  The park is often used past capacity during baseball season, as it has one of the best fields in East Oakland.  It’s also quite busy at night between deals, CHP pullovers, and other assorted events –  at least that’s what I’ve heard and seen.  A bit worn, flavored by blight, trash and dead plants, the new makeover just might make the park more inviting, in particular if visitors feel safer as the playground isn’t exactly visible from neither the street nor the parking lot. 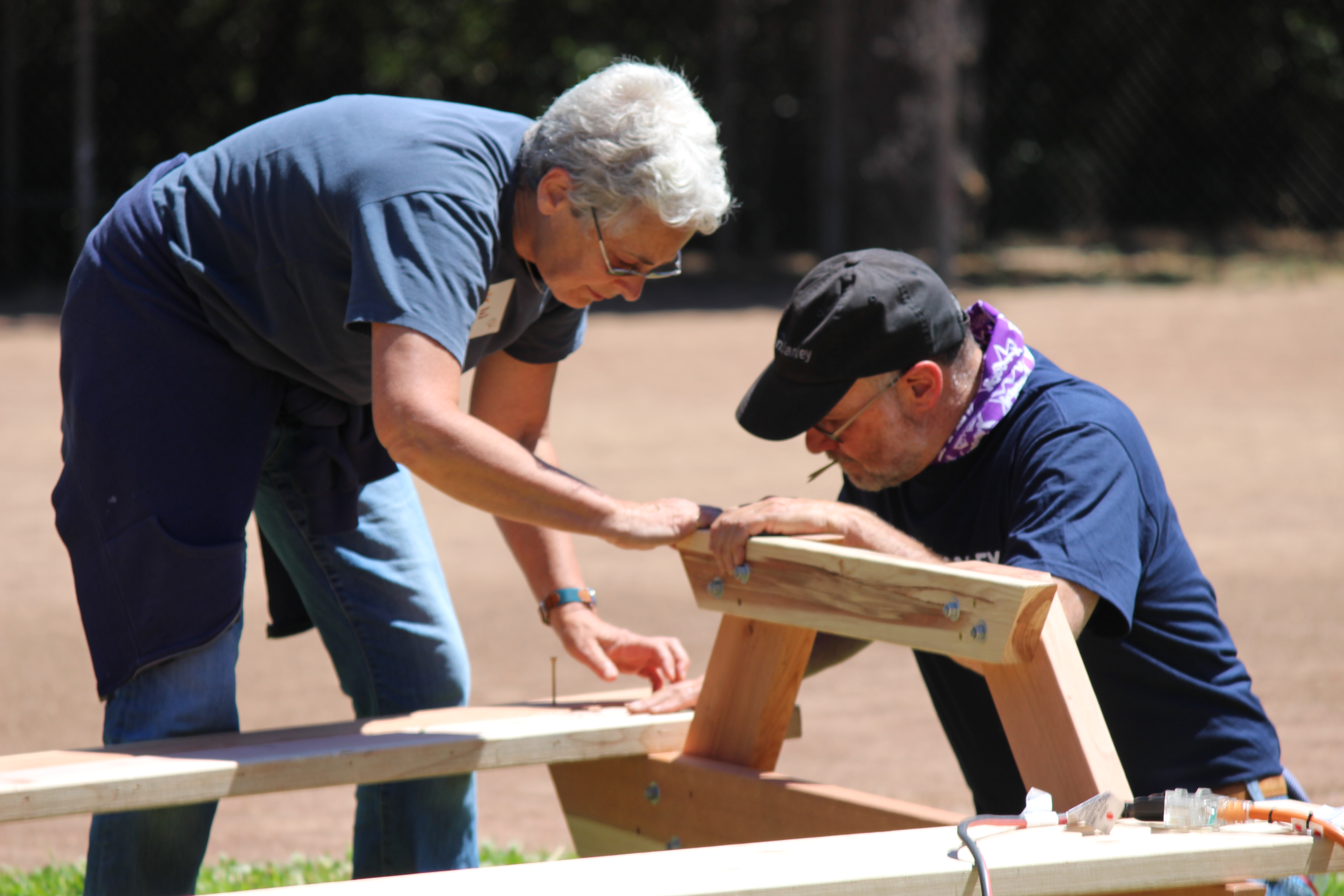 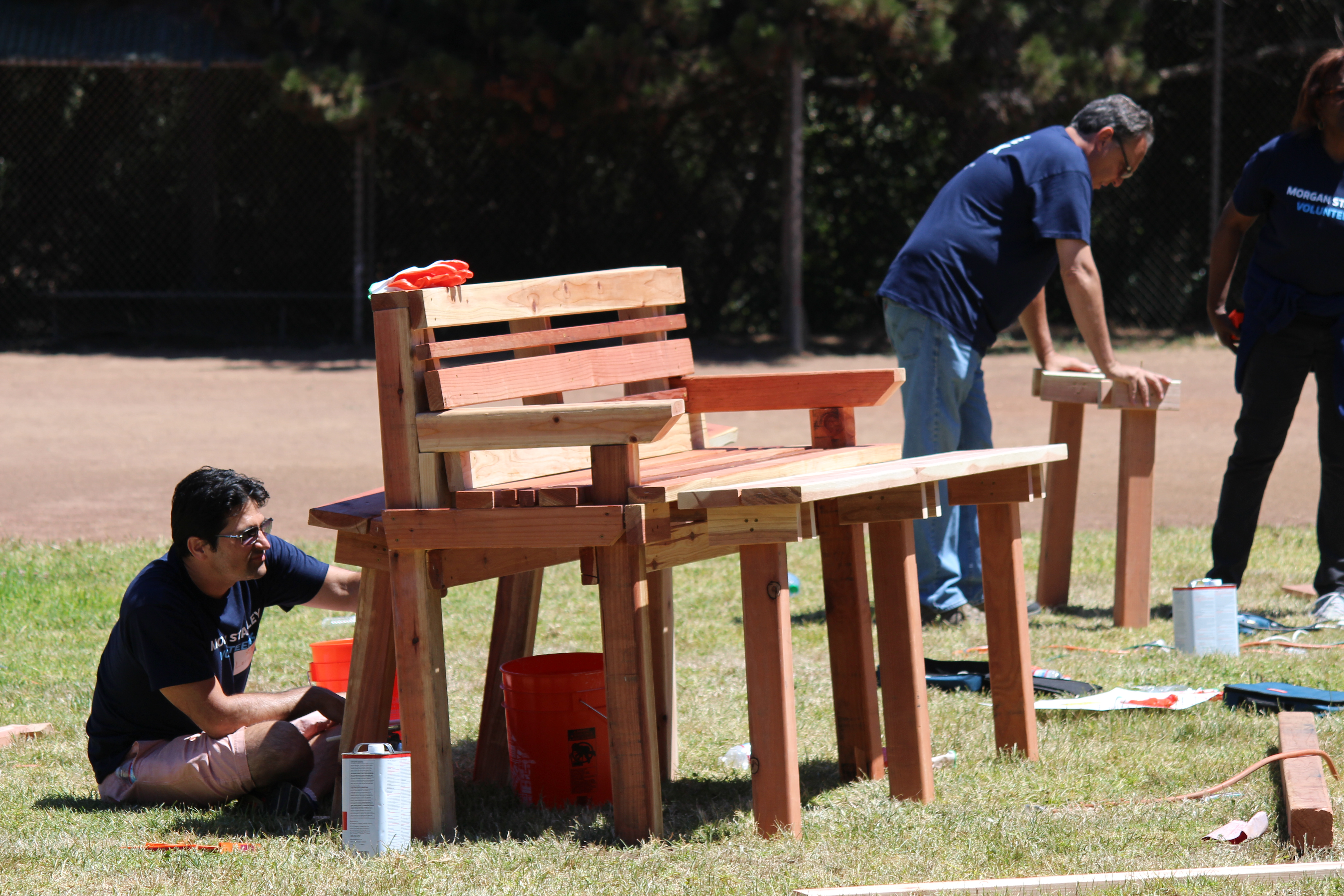 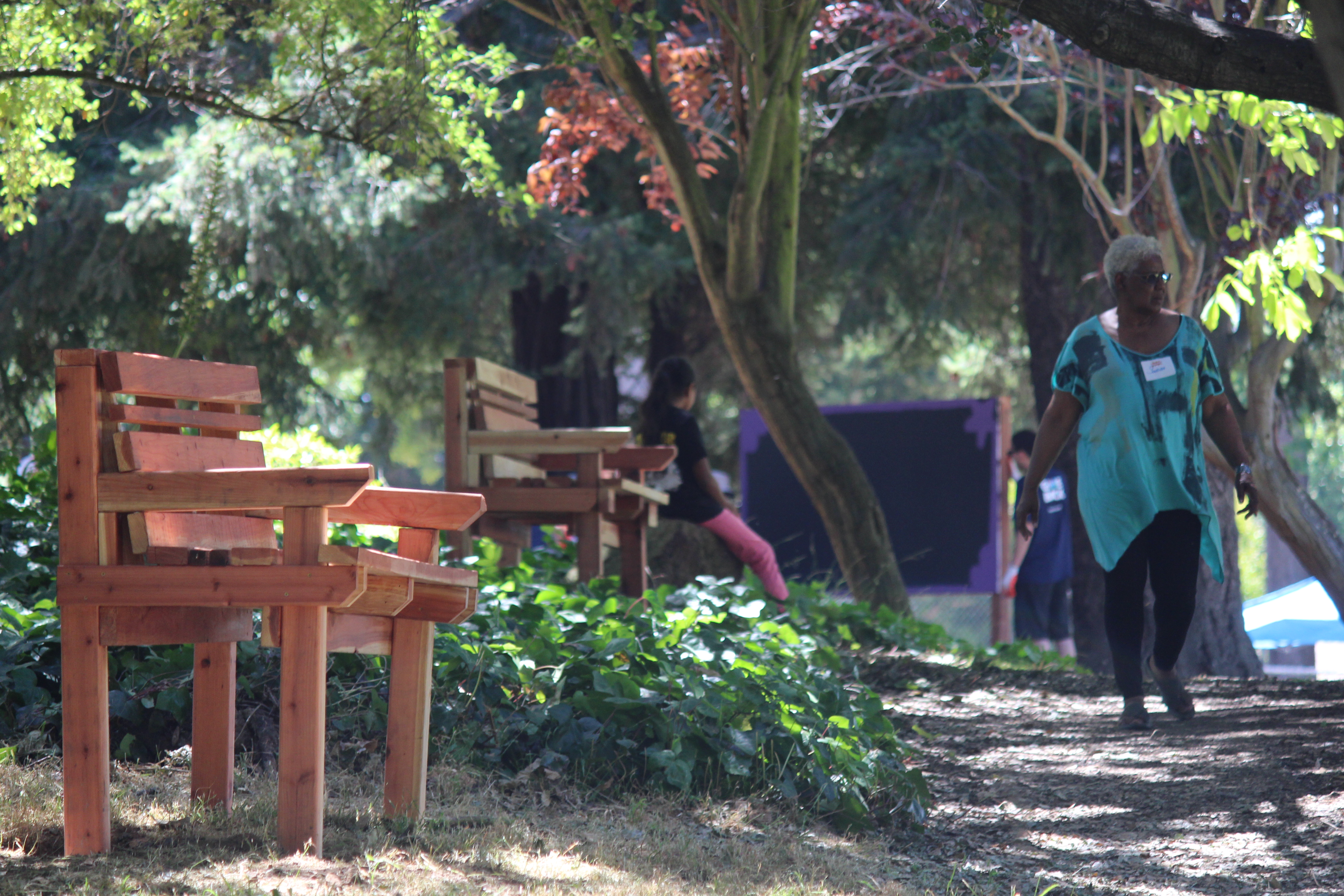 More than 50 employees of Morgan Stanley worked alongside roughly another 50 made up of neighbor residents, Oakland citizens and staff of the Oakland Parks Department.  Work included the construction of a new – expanded – play structure, new picnic tables and benches intended to line the park and create “gathering” areas.  The front entrance of the park was also redone using new water wise landscaping and mulch.  I don’t know if it will greatly change the park attendance for sure, but the beautified entrance and grounds will be not only more inviting, but more likely to be used by picnickers who won’t have to sit on the uneven lawn of pavement.  It was a rare gathering of the Oakland glitterai movers and shakers, including Mayor Jean Quan, the Head of the Parks Department, the supervisor of East Oakland Parks, the Alameda County Food Bank (also sponsored by Morgan Stanley), as well as staff from Representative Barbara Lee’s office, Morgan Stanley, the local press and blogosphere, and Kaboom (a non profit working to ensure that children, particularly for the 16 million  living in poverty, don’t are miss out on the childhood they deserve, highlighted by play.) 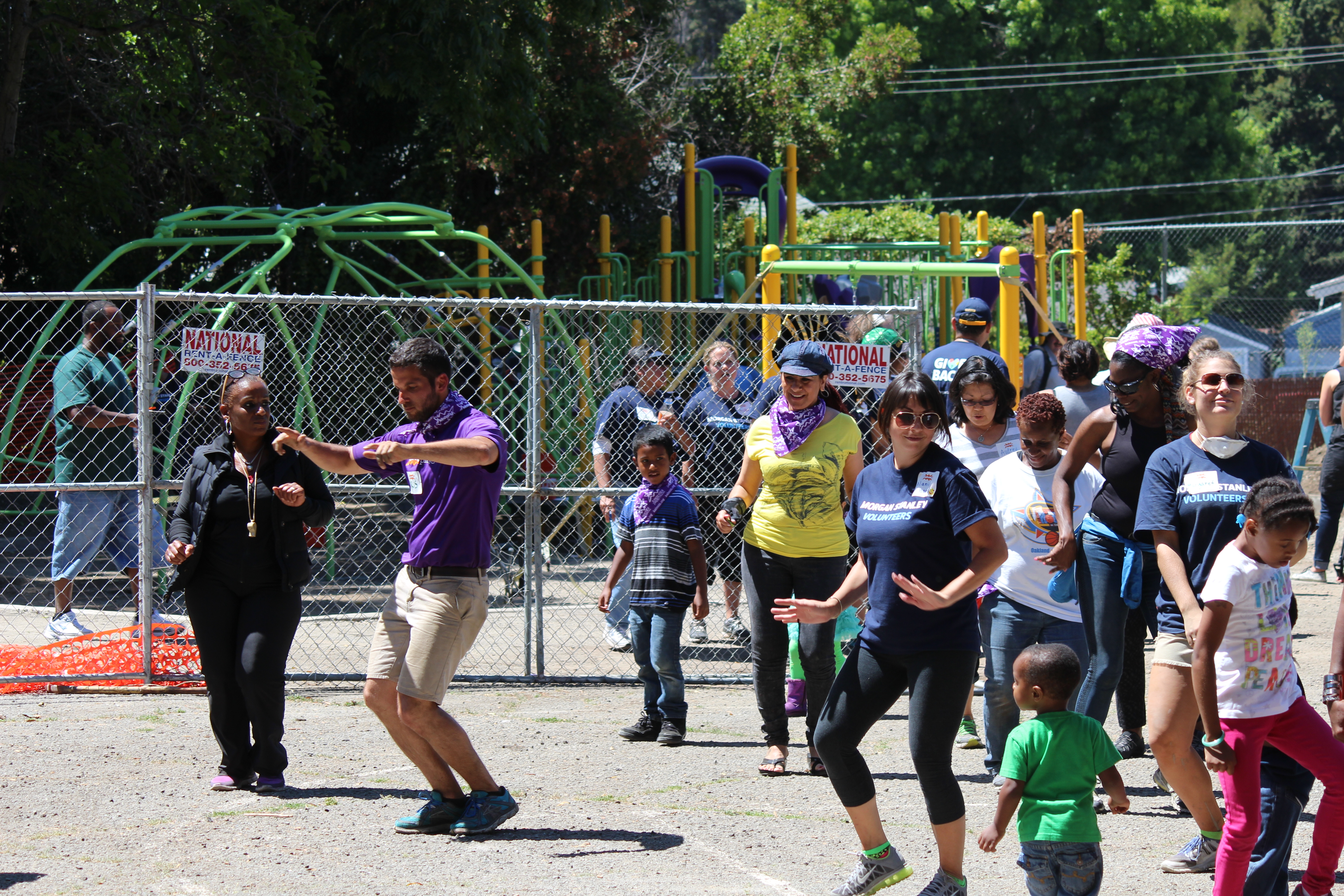 Today is a soft-opening for the park, as the cement needs to dry and the whole thing needs to be inspected.  So it’ll be closed back up behind fences until the official opening in the coming weeks.  It would be fantastic if the park helps to make this often overlooked neighborhood of Oakland (Millsmont or King Estates) into more than just a shortcut to the ball park or an aerial turning around spot for the Police helicopters on hot nights. 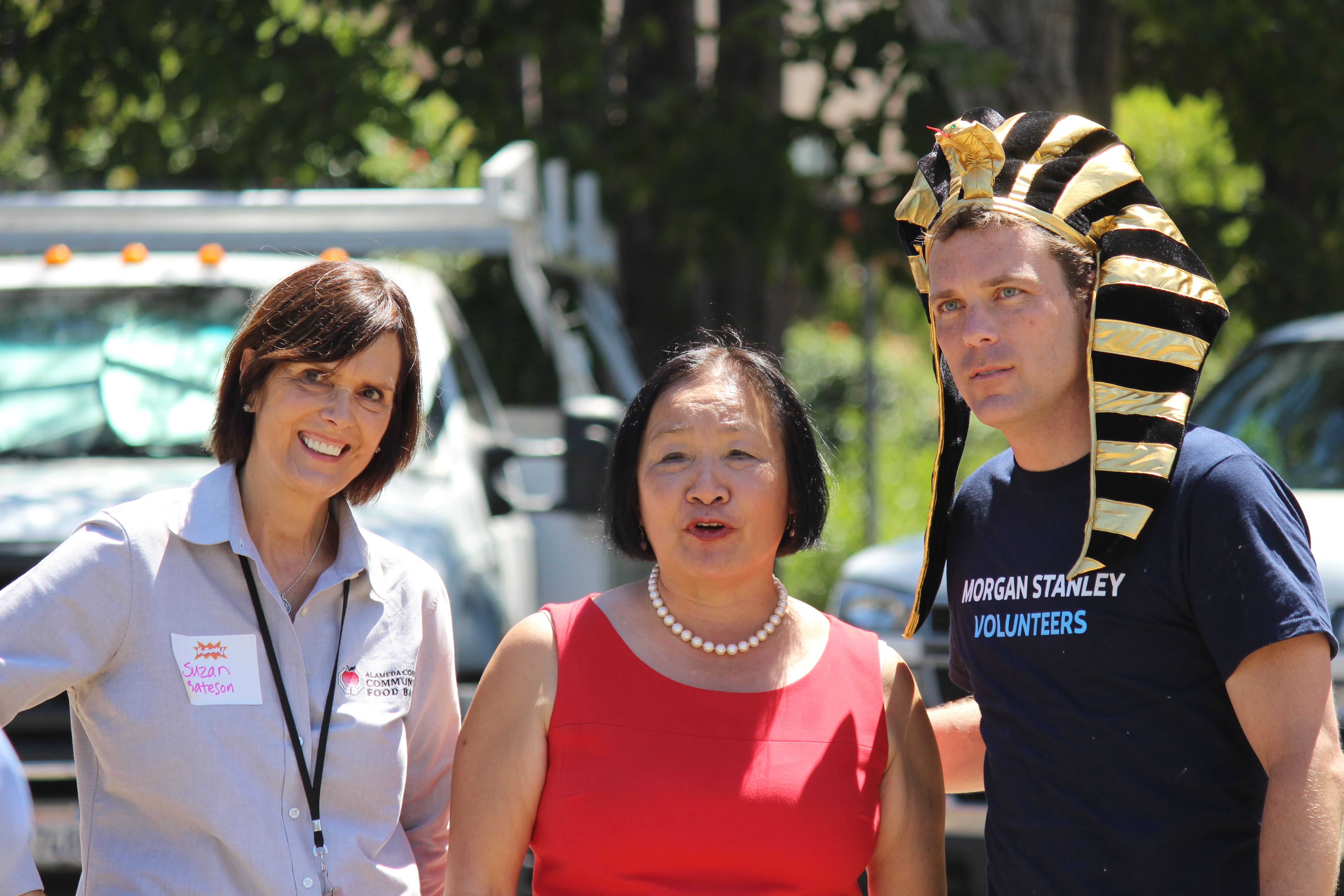 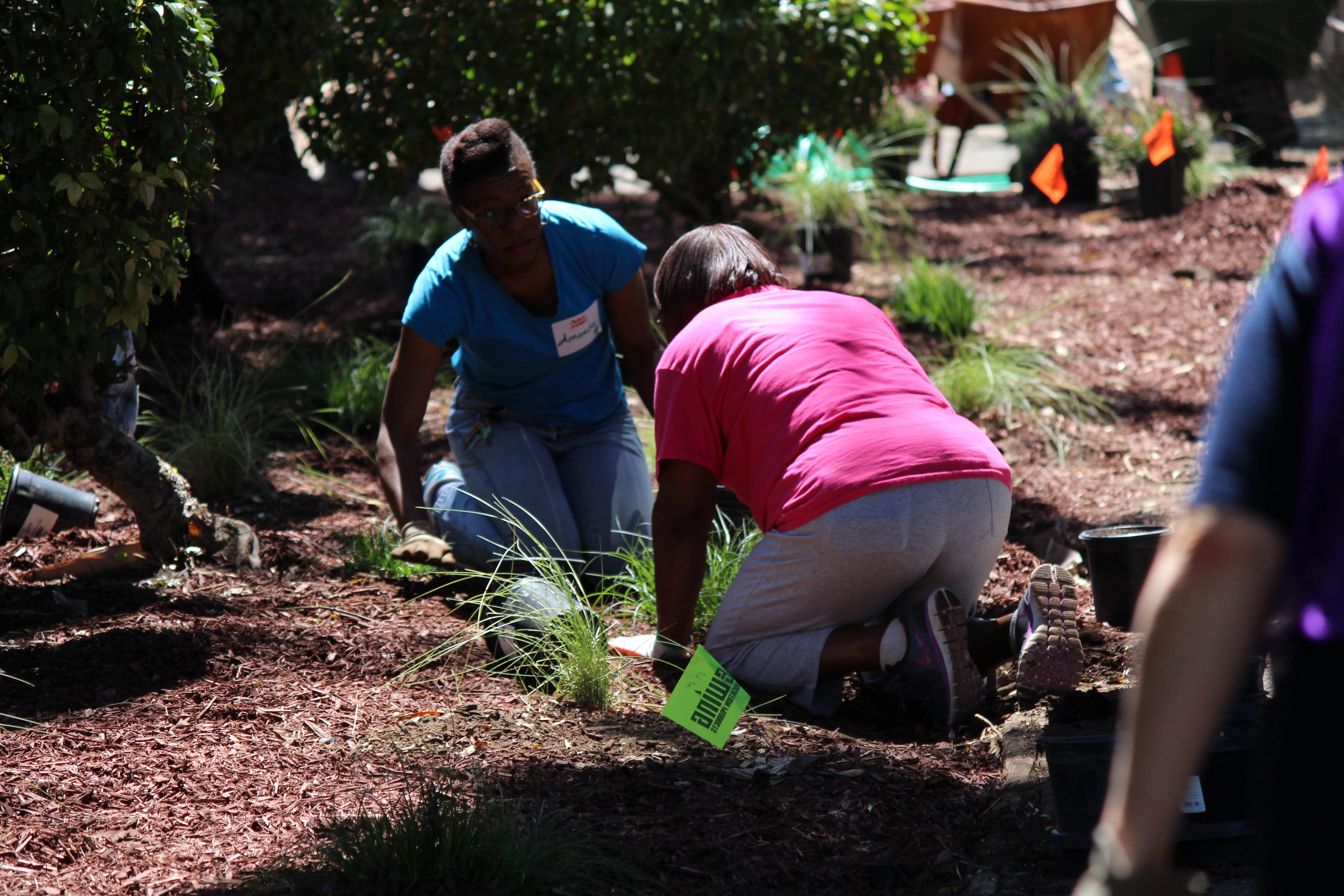 Read more about the build on @DIYGene‘s blog – blog.ouroakland.net – or on ABC 7  [reporting post with video] who was present throughout the morning.  Kaboom is organizing another playground build in the near future at a park on Seminary Ave.