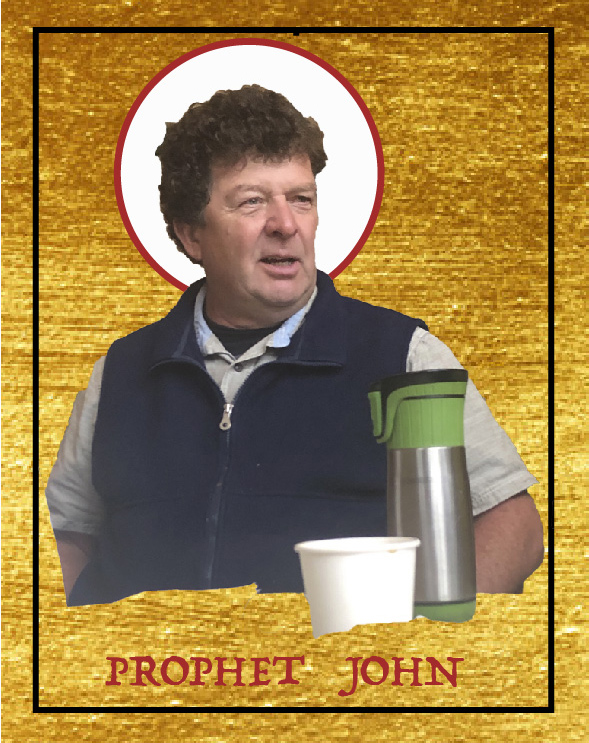 In Advent, we listen more attentively than other times to the voice and words of the prophets of the First Testament. We tend to think of a prophet as someone who can read the future, a sort of diviner or magician. But in the testimonies of the Bible a prophet is someone who sees the future in the present, not read it in magic like tealeaves or cast lots. A prophet is someone who sees more than the rest of us, sees deeper and wider, is able to glimpse what God is already doing and will continue to birth now in the present. It’s much less sorcery than about clarity. Once I heard prophetic vision compared to how someone on the ground sees a traffic jam versus how the reporter circling above in a helicopter does – seeing not just the impact but also the cause and the potential ways out.

The prophets are all poets. Poetry is the language we use (even today) to reflect on what is, in order to name was also is but which often goes unseen. Such truth can only be pointed to in metaphor and image, in beauty and contrasts that tease out the paradox which is too present for us to see as we’re often blinded by the daily grind.

It’s that mysterious, yet all too logical, truth that we are often blind and deaf to what is actually happening the prophet Isaiah points to when he recounts his calling to be a prophet:

Then the angelic creature touched my mouth with the live coal taken from the altar and said: “Now that this has touched your lips, your guilt has departed and your sin is blotted out.”  Then I heard the voice of the Lord saying, “Whom shall I send, and who will go for us?” And I said, “Here am I; send me!”

Isaiah 6:7-10
(it’s also repeated throughout the gospel stories of the life of Jesus)

Advent begins often with the prophetic vision of what God longs for the world to be like, of the perception that God is already teasing this out, and making it come to pass. It’s a vision of a banquet table that is greater and more succulent than anything we can imagine, a table at which there is enough space for every person of every nation: a place for all. It’s a meal that does more than fill empty stomachs, it creates a new hunger for a peace that transcends understanding, transforming instruments of war and destruction into agricultural tools to feed the hungry.

The word that Isaiah son of Amoz saw concerning Judah and Jerusalem.
In days to come the mountain of the Lord’s house
shall be established as the highest of the mountains,
and shall be raised above the hills;
all the nations shall stream to it.
Many peoples shall come and say,
“Come, let us go up to the mountain of the Lord,
to the house of the God of Jacob;
that the Lord may teach us his ways
and that we may walk in the paths of God.”
For out of Zion shall go forth instruction,
and the word of the Lord from Jerusalem.
God shall judge between the nations,
and shall arbitrate for many peoples;
they shall beat their swords into plowshares,
and their spears into pruning hooks;
nation shall not lift up sword against nation,
neither shall they learn war any more.
O house of Jacob, come,
let us walk in the light of the Lord!

But prophets aren’t just in the Bible. I made an icon of a photo of my friend John in the style of orthodox icons of saints. He shared recently at our church about his faith journey. In doing so he named how he perceived the opportunity to make that heavenly banquet come to pass here on earth, simply by offering to share the lunch in his backpack at a bus station…and then being willing to listen and talk – to not just see, but to open his ears and eyes; to be willing to perceive what is going on and what God may be doing. He not only helped those he encountered at that bus station see more, he blessed me with more prophetic perception as I heard him share his story.