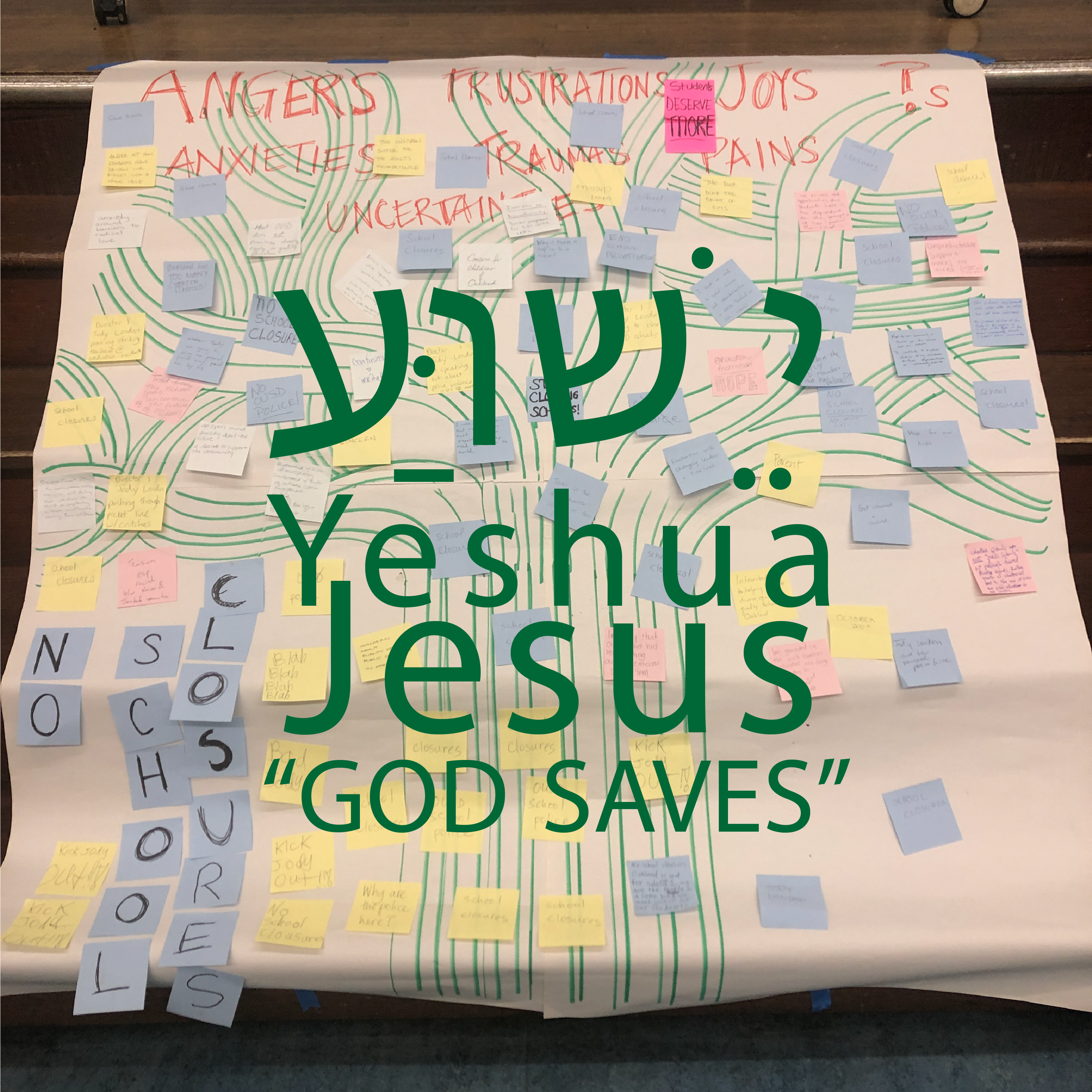 Yeshua (יֵשׁוּעַ  in Hebrew) was a common alternative form of the name Joshua in later books of the Hebrew Bible and among Jews of the Second Temple period. The name corresponds to the Greek spelling Iesous, from which, through the Latin Iesus, comes the English spelling Jesus.

The name Yehoshua has the form of a compound of “Yeho-” and “shua”: Yeho- יְהוֹ is another form of יָהו Yahu, a theological abbreviation used in the First Testament to stand for the name of God יהוה (the Tetragrammaton YHWH, sometimes transcribed into English as Yahweh), and שׁוּעַ shua‘ is a noun meaning “a cry for help”, “a saving cry”: a shout given when in need of rescue. Another explanation for the name Yehoshua is that it comes from the root ישע yod-shin-‘ayin, meaning “to deliver, save, or rescue”.

And so the name Jesus literally means Yahweh-God saves! or God delivers! In the story of how Joseph received a vision for his son in Matthew 1:18-25 this freedom-fighter prophetic-activist, savior-leader-messiah to come is called emmanuel (Hebrew for God with us) and Jesus (God saves and delivers us!).

We hear the word Jesus so often in songs, or on bumperstickers or in end-zones that we forget, if we’ve ever known, what the name promises. What I observe in my life and work is that exhaustion is the word that best characterizes our collective mood and outlook. We’re exhausted by the change, division and chaos in which we currently move and live. We’re exhausted by the wide spectrum of responses to that chaos – either the disarming paralyzation of despair or the paralysis of assumed or enforced notions of self-sufficiency. We alternate believing that there is no one who can save us or only we can save ourselves.

This exhaustion is what I experienced at a community school district meeting that I facilitated this week in my city of Oakland. I began the meeting inviting those gathered to participate in an exercise of naming what exhausts, distracts and paralyzes us and placing those words on the burning-bush-like-symbol of our city tree. Intended to be a way of disarming and momentarily pausing the frustrations that divide our civic population, it spoke to me even deeper of the way in which we are all disarmed, all hungry for deliverance from our current stuck-ness, saved from our collective brokenness.

My favorite Advent song is “O Come O Come Emmanuel” which speaks to this collective exhaustion and hunger for deliverance, using poetic words from the prophets who spoke during the Babylonian Exile of Israel, and yet which still render poignantly the way we feel today amidst school closures, impeachment, race struggles, class warfare, technological inundation, and massive social isolation. Here’s my favorite version of the song, done by the Punch Brothers, which you can listen to as you reflect with the questions below.