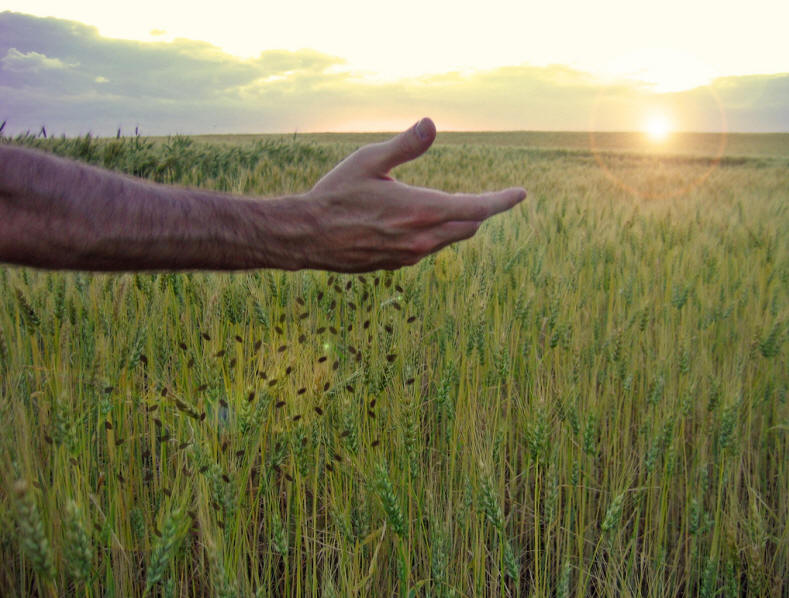 Is God still speaking in the world? Are the promises of God, which we hear in scripture, in the world? The evidence can seem contrary. Where is it? And when will it come? What do we have to do to be part of God’s plan (if there is one)? What does the good life resemble? Those are some of the questions with which today’s parable selection wrestle. But before we interpret, we need to focus on the words, for some perspective.

The Greek word basileia means “kingdom,” “reign,” “rule” and “dominion.” It’s both a geographic space and non visible one. In Mark 1-3 it’s been used only twice: first in 1:15 to talk of God’s dominion, and 3:24 that which opposes God. What is Jesus saying about it in Mark 4?

The Greek word “parable” literally means “throwing alongside,” in ancient Greek it represented a type of speech that was distinguished by its power to convince. It becomes a message that must be deciphered, something that when “got” opens new perspectives. It’s like a nut to crack, a pause in the hectic story telling of Mark. It’s both a word to hear and a word that provokes, a means and an end.

The average harvest in Palestine in Jesus’ day was 5 times the yield planted. So 30, 60, 100 times is a radical, extreme exaggeration. It points to something bigger than big, beyond human capacity and expectation. A fruitful harvest was the image most associated with God’s hoped-for new age to come at the end of history.

The Greek word “musterion” is often translated as “secret” in 4:11. It’s not something that cannot be understood, but rather is better grasped as a mystery, a secret, of which initiation is necessary.

Our series of parables then take up a definition of the dominion of God. There has been a division between that of God and that which opposes God. The adversaries of Jesus claim he is against God. Here we see that this division sparked in Mark 1 and 2 by the fast-paced irrefutable teaching and acts of Jesus are causing division. Because of the response of each person there is now a vision of insider and outsider, of good versus bad. It’s traced back to God’s will, the intent of God in creation.

This is a mystery. Why are some able to hear and others not? Why do some respond and others reject the word? How can God be actively present in the world, when according to all appearances that doesn’t seem to be the case then… in the days of those who first read Mark’s gospel … and for us now when we hear it? I’ve most often heard this teaching to be about what soil I am, a self-aggrandizing insistence on me being good soil. Yet soil is passive. By itself it can neither be or become good or bad. Something, or someone must first act upon it. How is this good news for this is what the gospel (Mark 1:1) is about?